Everyone’s taste is the look of the  Deluxe AtlanticCertainly not meeting, but personally, I immediately liked the vintage look, which undoubtedly stands out from the crowd of “mainstream guitars”. Well, a little less gold on the hardware would have been synonymous, because from head to toe, the guitar is decorated by gilded metal parts. It starts with the strap end button, continues through the tune-o-matic bridge, the tailpiece and the caps of the two humbuckers, right up to the headstock – and it’s got a hell of a lot of it. There are, of course, the six mechanics, even equipped with the clamping mechanism, an oversized cover plate for the Truss Rod and a gold-plated pin, which has found its place in the upper part of the verschnörkelt designed headstock. A practical use does not seem to have this pin But you can not unscrew it either. He adorns – and not too close. 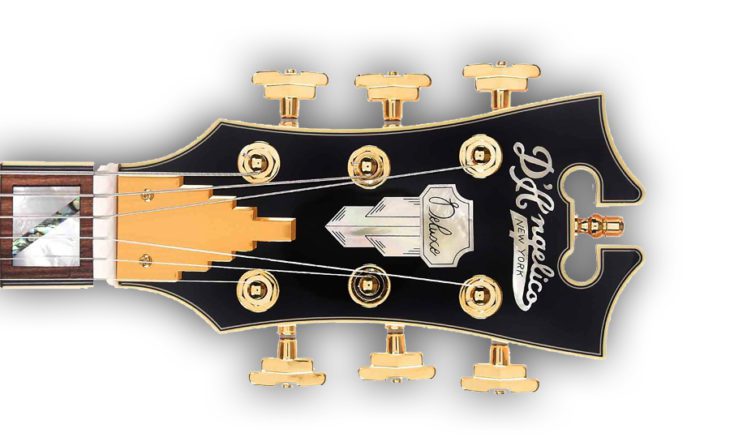 But before we deal with all the embellishments, just a few words to the base of the instrument. It consists of a full-length maple neck adorned with two pieces of linden, providing a wonderful base for a powerful yet sustain-rich sound. The finish of our test instrument called the manufacturer as “Vintage White”, the guitar is also available in plain black or in “Army Green”, an olive green tone.

All together, they own a tortoise pickguard, which occupies half of the ceiling and includes some of the electronics. In fact, it’s the front pickup that, like its colleague on the dock, is from the Far East production of Seymour Duncan comes and is enclosed at the neck of the pickguard. Easy to reach is the three-way switch, which controls the two pickups and presents itself in good quality. The other part of the electronics, the four pots at the bottom of the body, offers maximum performance in terms of tonal diversity. As usual, the volume and tone can be controlled with them, but the two tone-potentiometers also offer the option of operating both pickups in single-coil mode. More is hardly possible and what is going on, we will hear later in the practical part even more accurate.

The quality of the four controls is the other hardware in any way, completely free of play and absolutely precise they do their job, at best, the buttons are not very easy to use. If it is too slippery, who likes to attach a few handy types, maybe even golden? In view of the many glittering, you have obviously chosen a rigorous austerity course here. 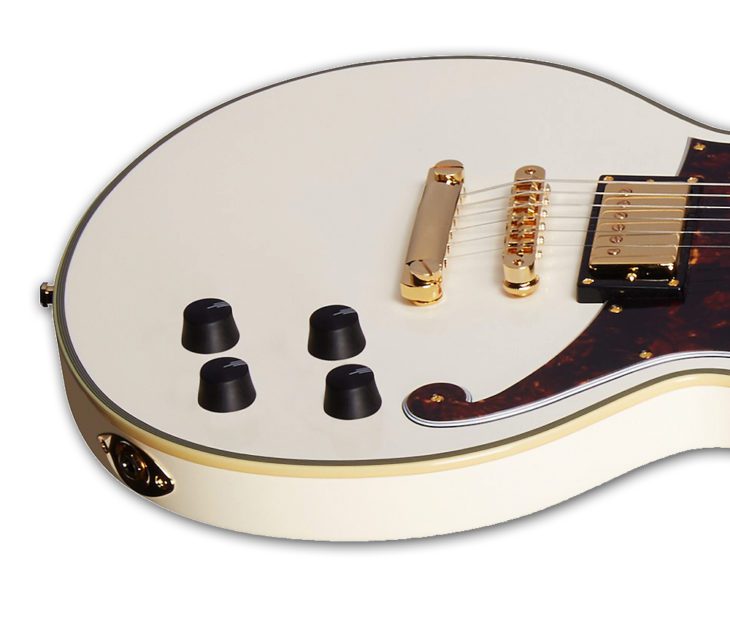 In order to give the gripping hand a natural feel, the neck was covered on its back only with a wafer-thin layer of satin lacquer – sticking has no chance even with sweaty hands! Further comfort in terms of playability awaits the user at the neck-body transition, which is so shallow that it should not really be called such. Together with the far cut cutaway and the unbelievably good string position with which our test instrument was delivered, there is a playability that I rarely experience on a guitar of this price range. Anyone who reads my articles will know that I am happy and rightly angry about poorly set instruments that are delivered to the customer. DAngelico Deluxe Atlantic offers, pure luxury!

And yet we do not even talk about the multi-layered binding on the edge of the fingerboard or the 22 jumbo frets used, which were perfectly processed at their edges and surfaces. As you can see, I’m pretty impressed by the high quality of the workmanship, the look and the feel, if you take the instrument in your hand. And that’s exactly what I’m doing for the practical part!

I have to admit: I did not dare to do that, because all too often Blender is in this price range and with this excess of gilded hardware and the country of origin Korea, the  DAngelico Deluxe Atlantic would be exactly such a candidate for this category. But it turns out quite differently, after a few minutes of dealing with the guitar, you may not even strip it off or take it off your lap. I’ve already written about the unbelievably good playability, and you could write a whole lot more about the enormous sound variety of the two humbuckers and the powerful sound that the basic construction with its full neck offers.

It is astonishing, or even surprising, how well the “Far East Duncans” harmonize with the basic sound of the guitar and, in doing so, hold back pleasantly with background noises. Even in single coil mode and Zerre turned on, there is a lot of rest, which of course enormously expands the sound spectrum. Just stupid that the flutschigen Potiknöpfe complicate the lifting of the Tone controls. Here is another graphic showing the circuit options: 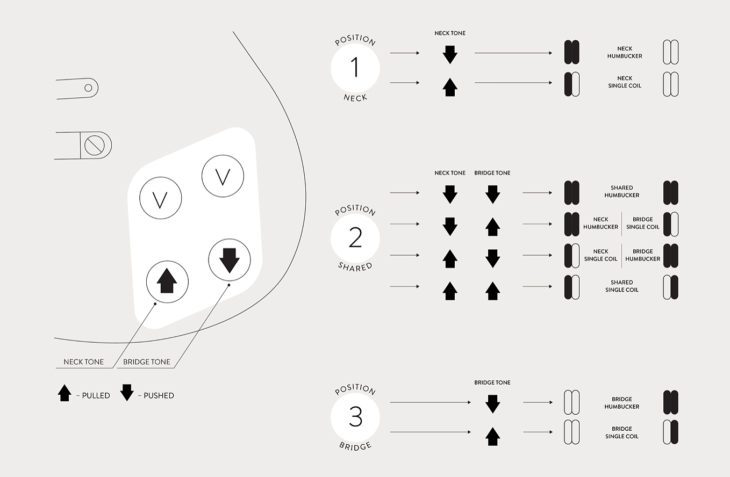 For the following sound examples I connected the  DAngelico Deluxe Atlantic to my test setup Orange Micro Dark with 1 × 12 “Celestion Vintage 30 Box . An AKG C3000 was used as the microphone before the signal was recorded in Logic and processed only in the level peaks. Other effects were not added.

Let’s hear in sound example 1, first the clean sound of the guitar, recorded here with the two pickups in single coil mode, so both tone pots are raised. It does not sound like a real reel, but this sound is more than usable!

That the humbucker on the neck delivers a charming single coil sound, shows the next sound example. A perfect support receives the sound through the strong foundation of the construction with the continuous neck. You can feel it almost at every stop of the strings.

Let’s get to the distorted sounds, where the  DAngelico Deluxe Atlantic  delivers a no less convincing sound. From the distorted blues rock to the heavy thunderstorm, she does everything without hesitation! First a reef with high distortion of the orange and recorded with the humbucker on the bridge.

The next two examples show the quality of the lead sounds of the two humbuckers. In Example 4 we hear the sound of the front humbucker and in the final example that of the counterpart on the jetty. Both really more than passable, right? 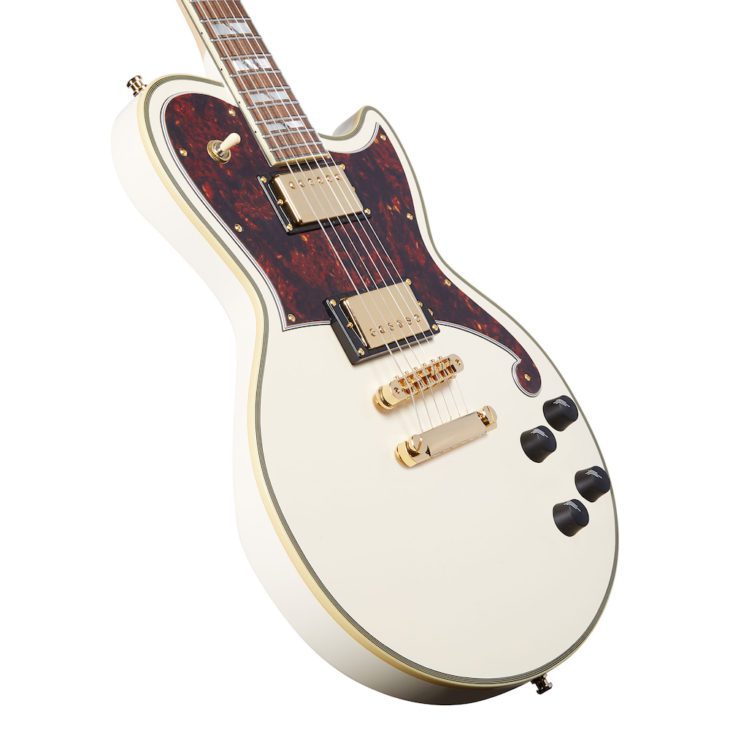 The only  downside at the DAngelico Deluxe Atlantic is so marginal that it does not stop me from missing our Best Buy rating for this electric guitar! We are talking about the slippery Potiknöpfen that are at best as a blemish on an otherwise excellent instrument. Of course, the optics will split the tastes into two camps, but in terms of tonal diversity and playability, there can not be two opinions in this case. Bravo!